Thomas J. Scott - Horse Portraiture -Thomas J. Scott was a popular painter of thoroughbred and trotting horses during the latter half of 19th century America. Born in Pennsylvania in 1824 he attended the Philadelphia School of Pharmacy and was bestowed a Ph. G. degree in 1846. Yet his passion for horses and his "natural art ability" would take him in a different direction. In the mid 1850's he made his way to Kentucky and became the student of record for Edward Troye, America's early and most important painter of thoroughbred horses and blooded stock. When the Civil War broke out, Scott along with most of Capt. Samuel Woodson Price’s “Old Infantry” State Guard unit in Lexington, KY, signed up for the Union cause and was mustered in as private of Company “E”, 21st Kentucky Volunteer Infantry at Camp Hobson, Kentucky on Jan. 2, 1862. By May 20 he was promoted to Hospital Steward and was serving with the Field and Staff. His regiment fought valiantly with the Army of the Ohio until November 1862 and then with the Army of the Cumberland for the rest of the War.

After the War Scott left the decimated South and went North to New York City. His passion breathed new life and noted horses of the day stood before the easel of T.J. Scott and his paintings reportedly numbered in the hundreds. Scott was known for his gift of delineating the true and exact conformation of his subjects. A search is on for information regarding Thomas J. Scott and as well, the location of his work.

If you have information about Thomas J. Scott, his family, or any of his paintings, including those on the "Search List" please Contact At. A Search Is On 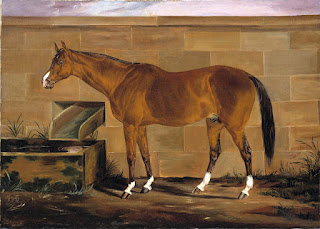